Ilhan Omar, Somalia’s trailblazer and an abled young woman,  is poised to be the first Somali -American woman or man and possibly the second Muslim ever to be elected to the United States Congress. Ilhan Omar, one of about million Somalis who fled civil war in Somalia, passed her formative years in a refugee camp in Kenya. Until she came to the United Sates, her future was anything but promising. 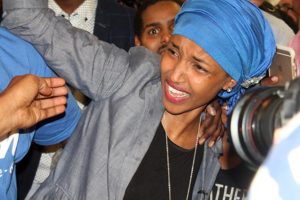 Once she settled in Minneapolis with her extended family, she decidedly worked hard not only to make life meaningful for her family but also for her community large.

Now that she is projected to defeat Republican Jennifer Zeneliski and carry the heavily democratic 5th Distinct in the November 6 congressional race, Ilhan would make once again a history. Her first history-making was when she won a seat at the Minnesota legislature where she served a full term.

The 36-year old Somali Democrat belongs to the left-leaning wing of the blue party and vigorously campaigns on issues such as health care, comprehensive immigration legislation that gives immigrants a path to citizenship, minimum wage, and public housing.

If elected, she will join the Black Caucus to fulfill her promises for her constituents. Moreover, if the House of Representatives returns with a Democrat majority, Ilhan Omar could possibly join the Congressional subcommittee for African Affairs.

For all these reasons and for the issues that her campaigns is for, Wardheernews editorial board endorses Ilhan Omar’s candidacy and wishes her a success.  We hope that she easily carries this largely liberal district.