Female activist Suad Abdi hopes to shake up system by standing for parliament, which has one woman among 164 MPs 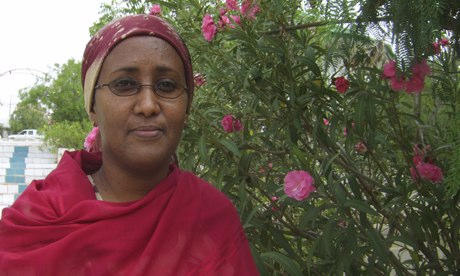 Suad Abdi, a founding member of the National Women’s Network, Nagaad, is determined to run for office in Somaliland. Photograph: Cathy Scott/Progressio

After 18 years as a social activist in Somaliland, Suad Abdi feels it is time to run for parliament. But she stands as much chance of winning a seat as a camel has of passing through the eye of a needle.
Women face few restrictions in Somaliland, the self-declared independent republic in the north-western corner of conflict-riddenSomalia. They can work, own property, and be vocal on social issues. But politics remains a man’s world in the former British protectorate, an oasis of stability in the region.

There is only one woman among the 164 MPs and just three in the cabinet of 40. There is not a single female judge in Somaliland, although in 2012 four deputy attorney generals were appointed for the first time.

Abdi, a founding member of the National Women’s Network, Nagaad, and country representative of the charity Progressio, attributes the lack of women in politics to the male-dominated clan system. “Most political parties get support from clans, which decide who should become candidates and the clans don’t put women forward. The clans want men because they know where the men’s loyalties lie. When women marry, their loyalty changes to her husband’s clan,” says Abdi.

The clan a woman is born into tends to be reluctant to support her if she marries into another clan, yet her husband’s clan may suspect she remains loyal to her own clan. Somaliland, home to 3.4 million people, consists of three main clans with eight sub-clans.

Abdi belongs to the Isaaq, Somaliland’s largest clan. To shake up the republic’s political order, Nagaad and other civil society groups are pushing for changes in the law that would set a 20% quota for women in parliament, in the runup to elections at the end of the year.

An attempt in 2007 was blocked by the House of Elders, the conservative upper chamber, and a bill in 2012 ran out of time. The president, Ahmed Mohamed Mohamoud Silanyo, is on record as favouring quotas, but Abdi doubts he is 100% committed, while parliament, she says, thinks it is the responsibility of the government to take the initiative. Both favour a 10% quota. “The ball is between parliament and the president,” says Abdi, who thinks 10% is too low.

Some question whether quotas are the solution to women’s under-representation in politics, but Helen Clark, who was prime minister of New Zealand for three terms and now heads the UN Development Programme, has no such doubts. “I think if nothing else is working, you should have quotas,” she said at the Women of the Year lecture in London last week.

“One of the things that improved representation here in the UK was Labour’s women-only shortlists. Women are now much more numerous in the House of Commons. We reached the 30% representation in New Zealand, which is a millennium development goal, because we switched to proportional representation, partially, and parties had to put women on the party lists.”

Quotas are increasingly common in sub-Saharan Africa. Since 2003, Rwanda has led the world in women’s representation in a single or lower house of parliament. After the 2013 election, it had 64% women in its chamber of deputies. Nearly a dozen sub-Saharan countries top the world list, with more than 30% women in their parliaments. The first countries to adopt quotas in the 1990s and early 2000s were emerging from conflict such as Burundi, Eritrea, Mozambique and later, Angola.

Seeking a fresh political start after war, these countries adopted new constitutions and electoral laws that included quotas, Gretchen Bauer, professor and chair of political science at the University of Delaware, wrote on the Democracy in Africa blog last month. Pressure from national women’s movements with support internationally and a liberation movement with a stated commitment to women’s emancipation helped.

Other countries have since jumped on the bandwagon: Kenya, Lesotho, South Sudan, Sudan and Zimbabwe and for the first time, Francophone countries such as Burkina Faso, Cape Verde and Senegal. Somaliland has to look only next door to Somalia, which has 35 female MPs and a female foreign minister. The constitution has reserved 30% of seats for women in the lower house, although the actual numbers – 38 of 275 – total 14%. Still, that is much more than Somaliland, which prides itself as more politically advanced than Somalia.

Although Abdi is determined to run for office, she has no ambitions to become a minister. “When you become a government official you are accountable to the president and there is very little room for change,” she says. “Leaders take criticism as personal attacks rather than constructive feedback, and you become a ‘yes person’. I have my own views; I am not that kind of person.”