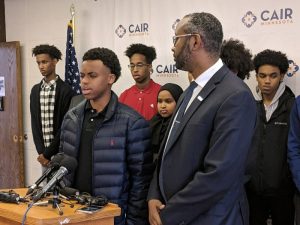 MINNEAPOLIS (AP) — Prosecutors on Monday charged a Minneapolis area man with a felony for allegedly pulling a gun on a group of young Somalis inside a McDonald’s last month.

The Hennepin County Attorney’s charged Lloyd Edward Johnson, 55, of Eden Prairie with felony terroristic threats and carrying a pistol without a permit, a gross misdemeanor.

In a statement, County Attorney Mike Freeman said Johnson “did everything he could to provoke this incident.” Freeman called Johnson’s alleged actions “outrageous behavior” and said, “it is only through sheer luck that no one was injured.”

One of the teens at the restaurant told reporters Monday that he and others feared for their lives, Minnesota Public Radio News reported .

“We saw the man who was yelling, ‘Don’t touch me, get away from me,’ and he was acting extremely crazy,” 17-year-old Billal Abdi said at a news conference with Jaylani Hussein, executive director of the Minnesota chapter of the Council on American-Islamic Relations, a Muslim civil liberties and advocacy group. “He proceeded to pull out the gun, and all of us scattered, so we wouldn’t get shot.”

According to the complaint, two young women told police they were trying to pay for their food with a digital app at the fast-food restaurant in Eden Prairie on Nov. 19, but it was not working. Johnson was behind them and allegedly said “you were probably trying to pay with EBT,” an electronic benefit transfer card used to transfer federal government benefits to stores.

One of the women turned and confronted Johnson. Johnson then approached the other woman and balled his hand into a fist, making her afraid he was going to hit her, according to the complaint.

Other friends at the restaurant then confronted Johnson, who walked away from the group but returned with his cellphone, appearing to record the argument. Johnson then yelled at everyone to back up before pulling a handgun from his waistband and walking out, the complaint said.

A video viewed widely on Twitter shows several young people confronting the man. It shows a teenage boy and the man pushing each other before the man stumbled backward and out the door.

Investigators got short clips of the confrontation from cellphones, but it took a week to obtain the store video, Freeman’s office said.

Johnson told police he did make the comment about EBT and that it was insulting, the complaint said. He also acknowledged he did not have a permit to carry a firearm. Police found a semi-automatic handgun in between the two front seats of his car. The gun had a magazine loaded with 10 rounds of ammunition but did not have a round in the chamber, according to the complaint.

Johnson was charged by summons and does not have a first court appearance set yet. He was earlier arrested but released from jail while prosecutors weighed possible charges. Online court records do not list an attorney who could comment for Johnson.