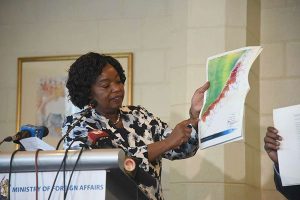 Foreign Affairs Cabinet Secretary Monica Juma displays a map indicating that the oil blocks under contention with Somalia are in Kenya’s territory, during a press conference at Intercontinental hotel in Nairobi on February 21, 2019. PHOTO | EVANS HABIL | NATION MEDIA GROUP

The Norwegian consultancy firm Spectrum Geo says all the data it gathered about Mogadishu’s oil stock in the Indian Ocean, and which was used to market to investors in London, was sourced entirely from Somali territory.

In a brief statement on Monday, Graham Mayhew, the company’s Executive Vice President for Africa, Mediterranean and Middle-East Region, said it had been contracted to gather seismic data only in Somalia territory, avoiding the disputed regions contested by Kenya.

“All of this seismic data was acquired wholly within the maritime territory of the Federal Government of Somalia and no data were acquired within the area currently the subject of the maritime delimitation case with Kenya,” he said.

The company, though not responding directly, was referring to Kenya’s claim on Saturday that Somalia had “auctioned” oil blocks belonging to Kenya, during an oil conference on February 7 in London.

Somali delegates had marketed their oil stock profile to investors, largely relying on seismic data gathered by Spectrum since 2015 when it signed a contract with Mogadishu to obtain additional data.

The company confirmed no oil blocks had been auctioned but said the conference had only been a “promotion” of the Somali offshore oil and gas.

Mogadishu had equally denied the claims on Sunday.

But even as the firm clarified the matter, both sides continued to front divergent maps of the same area.

Spectrum produced a map of seismic study area, indicating all the 15 blocks are in Somali territory, including the three southern blocks in the Jubba-Lamu Basin, but north of the parallel latitude proposed by Kenya.

Kenya had on its part produced the same map, but indicating the blocks labelled L21, L23, L24 and L25 as some of those controversially marketed.

Despite the apparent calming of the tensions between Nairobi and Mogadishu, the tiff over which blocks should be marketed and which ones should not, has been a matter of controversy before.

Long before Somalia filed a case at the International Court of Justice (ICJ), seeking to redraw the maritime boundary with Kenya, it accused Kenya of granting exploration licences to French firm Total SA and Italian firm Eni, even as the two sides presented the dispute before the UN Commission on Limits of the Continental Shelf (UNCLCS).

Somalia would later pull its submissions from the UNCLCS and sue at the ICJ, but the matter on exploration still emerged.

For example, Somalia’s legal team argued Kenya had continued offering offshore blocks based on its claimed boundary, even though Somalia objected.

“Kenya’s Block L-22 straddles the equidistance line in areas between approximately 52 and 104 miles from the coast,” Somalia argued in its submissions.

“Kenya awarded it to the French oil company Total SA in 2012. In 2013, Total carried out a 2D seismic survey and sea core drilling operations in the area,” the court heard.

Somalia told the court that blocks L21, L23 and L24 which Kenya claims as being in its territory “lie in deeper water entirely or predominantly on the Somali side of the equidistance line.

The ICJ, which has binding decisions on both Kenya and Somalia, allowed the case to continue to full hearing despite Kenya objecting, arguing there was a Memorandum of Understanding (MoU) that provided for alternative dispute resolution.

A bench of 13 judges, where three dissented, agreed that the MoU, signed by then Foreign Minister Moses Wetang’ula and former Somali Planning Minister Abdirahman Abdishakur Warsame, was a legal document for both Somalia and Kenya.

Mr Warsame had earlier told the Nation his wish for an MoU was rejected by Somali MPs and that the court should resolve the issue.

Mr Wetang’ula says Kenya should only have cautioned investors to check where the blocks lie before entering any deals, rather than issuing a harsh statement.

Somalia – a country in democratic crisis.

Converting to Islam cost me…