The Somali region under Ethiopia rule, better known internationally as the Ogaden[1], has recently been in the throes of turmoil not of its own making. What we have witnessed there is the direct takeover of the area by the Ethiopian federal army, and the sacking of its leader and his so-called administration. This development inevitably raises serious questions and sends messages, to all to whom it may concern:

Is it the case as Addis Ababa that what Ethiopia did to the Somali region, admittedly a flagrant violation of the region’s autonomous status (if it is binding), is nothing more than an unavoidable one-off intervention in order to response to what it considered a dangerous crisis but otherwise respects the constitutional status of the Somali region? Or is the truth, pure and simple, that the Ethiopian government has taken off the kid gloves and dispensed with the self-serving self-rule charade and dealt with the region as the colony it is, and free to initiate “regime change” each time it wants to replace one compliant gatekeeper with another for its own ends? Needless to say, this is the case.

In coming to power, Abiy Ahmed needed the actions he took in the Somali Region, often the punching bag for Ethiopian rulers, to send messages to his intended audiences: first to his ethnic Oromo constituency that he is not neutral but on their side in the ethnic clashes between them and Somalis, or between the leaders of the two regional states, but puts the blame squarely on Abdi Ilay’s shoulders and his administration for which they have to pay the price. Secondly, he was playing to the international gallery that he is serious about his commitment to respect for human rights and a clean-up of Abdi Ilay’s rotten Gulags was the best place to start. Thirdly, he wanted to send a message to his Amhara and Tigrean detractors that they have to, like it or not, reconcile themselves to an Oromo-led Ethiopia under his leadership. 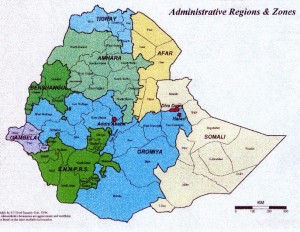 The glaring different treatments accorded to the regions are instructive. Addis Ababa would not dare or rush to intervene in other federal regions because they are the real true Ethiopians enjoying their rightful constitutional powers. In a word, they are untouchable when it comes to their internal affairs. Addis Ababa can of course use its wider federal powers and declare a state of emergency, or act on overall national matters affecting the whole country as a whole like public disorder or humanitarian disaster. But other than the Somali region, it keeps out of their internal affairs.

The different treatment arises because of the two different classes of people in the Empire. On one side are the original Abyssinians and their assimilated and Amharized peoples/regions. Though some are more equal than others in this group, what unites them is that they consider themselves Ethiopian by choice and together are the masters of the land and power rotates among them. On the other hand, the Somali region that belongs to a people that had been at war with Abyssinia off and on for centuries is physically part of Ethiopia by force but otherwise maintain their national Somali identify and aspirations and rarely subconsciously  see themselves Ethiopian nor do the other group seen the Somalis as one of them. They are a conquest that cannot be assimilated nor Amharized. And for that, they are permanently condemned to the bottom of the ladder. We have seen a USA led for the first time by an Afro-American. It is neigh impossible to see an Ethiopia led by a Somali.

The misfortune of the Somali region is that it is under a black colonial power and not a European one as the rest of black Africa had. With the wind of change blowing against colonialism in the early 1960s, it was easier to dislodge European colonialism but little attention was paid to Ethiopia’s case as if colonialism is alien among blacks. With its unique history in a continent that largely had little else history to be proud of, Africans emerging from the indignity of colonial rule idolized Haile Selassie and Ethiopia as the mother of Africa and for that reason paid little attention to its true colours as an empire colonizing other territories. Ethiopia shrewdly exploited these valuable sentiments to win its bid to have Addis Ababa as the seat of the OAU (now the AU). The leverage it acquired helped it to ward off the demand for self-determination and independence by its colonial territories (Eretria and the Ogaden).

On the premise that the Ogaden is an occupied colony of Ethiopia, this article is devoted to the history of the right of the Ogaden people to self-determination, the ups and downs of their cause and where they go from here as they find themselves in a ditch.

Osman Hassan is a seasoned journalist and a former UN staff member. Mr Hassan is also a regular contributor to WardheerNews

Delete Your Past: Ramadan Reminder