A truck prepares to dump trash at Jazeera Beach, one of the most popular beaches in Somalia’s capital, Mogadishu. (Courtesy – Jamal Ali)

Before Somalia’s civil war, the shorelines of the capital were renowned for their wide beaches, cool breezes and pure blue ocean waters. In fact, all of these attractions are still there today. It’s just that in many locations, they’re spoiled by ever-spreading piles of trash.

Mogadishu is a city of some 2 million people that produces an estimated 2,500 metric tons of garbage per day. And yet until very recently, it had not had a single designated trash disposal site or recycling plant. Instead, people dumped, and mostly continue to dump their trash in the streets, on the beaches or into the ocean itself.

Photos acquired by the VOA Somali Service program Investigative Dossier show the extent of the problem. One picture captures a market worker dumping a wheelbarrow full of discarded fish scraps into the water. Others show huge mounds of cans, bottles, plastic bags, boxes, food waste, scrap metal and other trash strewn across the beaches, with goats and the occasional scavenger picking through the remains.

Most ominous of all: photos of smoke rising from the brownish-gray piles as they bake in Somalia’s equatorial heat. Winds push the smoke and a foul smell across the city, burning eyes and noses, and endangering the health of Mogadishu residents, as well as the environment. 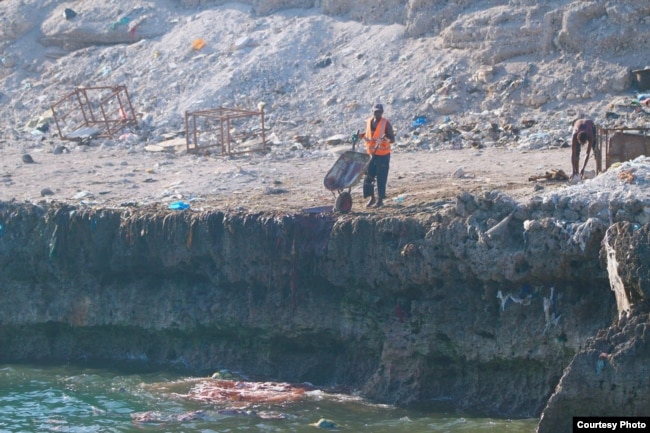 To combat the problem, the Somali government officially announced the allocation of two sites for waste landfill in late December. One site is in Mogadishu’s northern district of Huriwa, the other in the Wadajir district in the city’s southern suburbs.

But observers say more action is needed. There are currently no laws that ban trash dumping in the capital, and the issue is barely on the radar of police and city officials, whose first priority is maintaining safety in a city where al-Shabab militants launch frequent terrorist attacks. 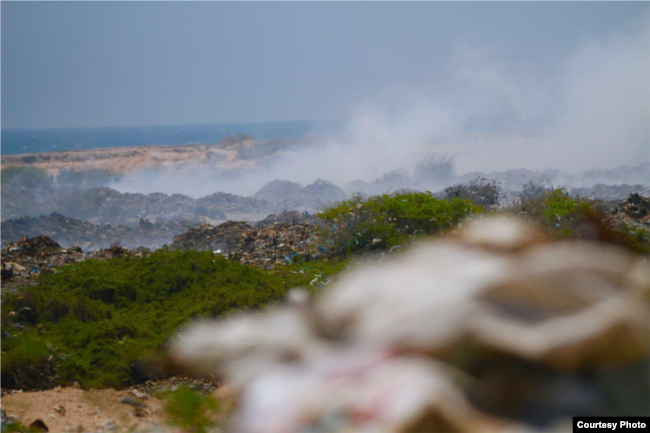 Parts of the beaches remain garbage-free, and Somalis congregate there to enjoy the breeze and play in the warm water. Videos of the sun-splashed scene are a reminder why Mogadishu, before years of civil war, neglect and the militant insurgency left much of the city in ruins, was known as the Pearl of the Indian Ocean.

One of the most popular sites, for both beach-goers and trash dumpers, is Jazeera Beach. Mohamed Yahye is a Somali journalist who says he has seen all kinds of waste products abandoned there. “I saw a tanker bring sewage waste and unload it onto the beach,” he says.

Nur says rampant waste dumping can lead to higher rates of cancer, typhoid, hepatitis B and C, diarrhea and cholera.

But, “it’s not just health problems, it also impacts on environment – the air, the land,” he says. “It deforms the appearance of the cities… When you fly on a plane over Somali towns, you see trees being covered by plastic bags. These bags kill trees because they deny air. They are also a health hazard to the animals, who die when they eat [the bags].”

Omar Abdullahi Hassan, commissioner of the Wadajir district, which includes Jazeera beach, says it’s now illegal to dump trash at Jazeera, and he hopes the new disposal sites will be in use soon. 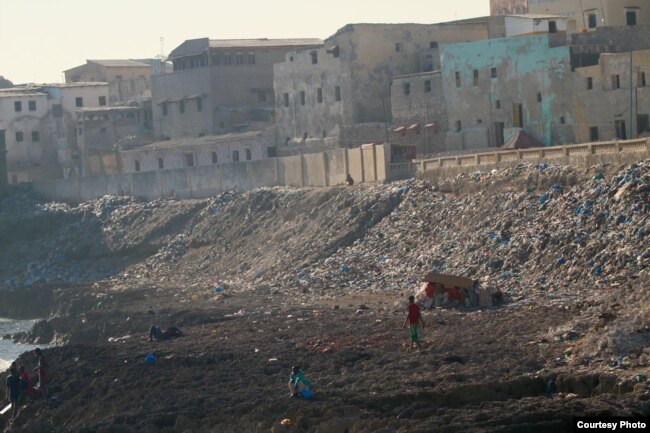 “Beaches are the most beautiful parts of this country. It’s inappropriate to use them as dump sites,” he told VOA. “We have been working to get centers for management in recent weeks. Luckily, we found a large area [for waste disposal].”

That may come as welcome news to Mohamud Yusuf Hassan, the head of the Environmental Cleaning Company, or ECCO. ECCO is one of three companies named by police as dumping trash on the beaches, although no arrests have been made.

Hassan said his company, which employs 326 people, is heeding the warning from police. “We don’t dump into the sea now,” he says.

But he says the company has trouble finding places to dispose of trash or conduct recycling. “There is no place to manage it,” he says. “Where do people take the rubbish to?”

He too says legislation is key in going forward.

“Without legislation, there is nothing can be done,” he said. “There is someone carrying trash in his motorcycle or in a truck and there is nothing we can do if they dump it in the street, because there is no law prohibiting it. We can’t force him not to do it, all we can say is don’t do it.”